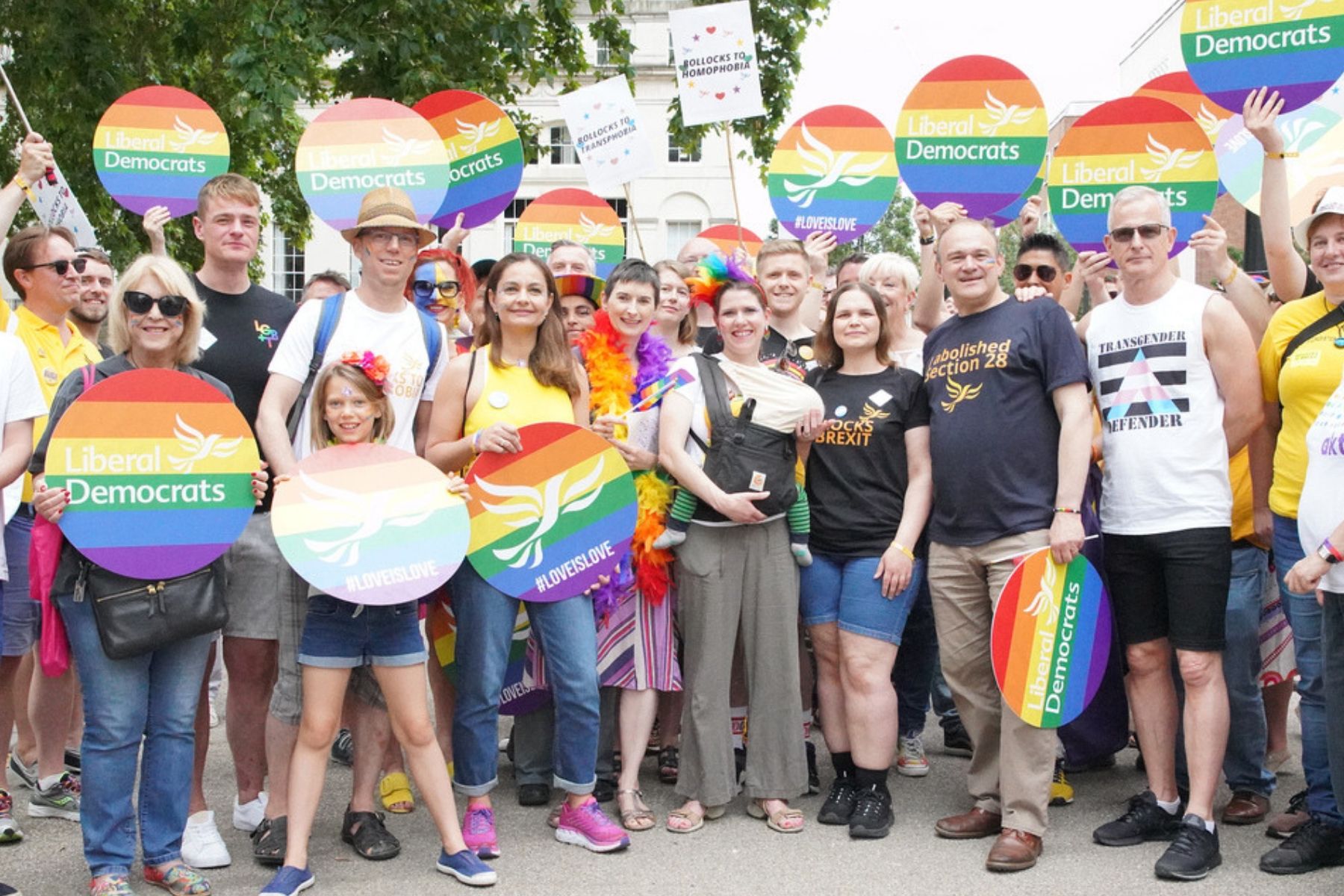 Siobhan Benita with some of the Lib Dem delegation at the Pride march. This week's update from life on the campaign trail as the Lib Dems' candidate to be our next Mayor of London.

I returned from a trip to India for work and straight into another by-election campaign. Due to the very sad passing of our councillor Mona Adams from lung cancer, we are fighting a by-election in East Sheen. Mona was the first Lib Dem ever to win a seat in East Sheen ward when she won at last year’s local elections, as the Lib Dems took control of Richmond council. She served a year as deputy mayor before her death, and was rated a bright light and force of nature by her colleagues, who are determined to retain the seat as a tribute to Mona. I joined a large group of Lib Dems to canvass with our candidate Julia Cambridge, with our anti-Brexit message very well received in the Remain-leaning area.

Ice cream weather in East Sheen Richmond. Lots of teams out. Huge thank you to everyone 🍦🍨🍧
Great to have Susan Kramer and Mayoral Candidate @SiobhanBenita speaking to residents about traffic, Hammersmith Bridge and Heathrow 🔸️🔶️🔸️ @TRLibDems #EastSheen pic.twitter.com/R7PaTyAIcZ

I was delighted to host a "Conversation with Chuka" at the National Liberal Club. Around 150 people came to hear from our newest London MP and we discussed the future of liberalism, fighting Brexit and a wide range of London issues.  It was a great evening and despite covering serious topics we also had a lot of fun - with a raffle and auction of course! I look forward to working with Chuka on London issues over the coming weeks and months. Thank you to all those who joined us for this fundraising event - every donation counts in what will be a fiercely fought campaign for City Hall over the coming months. You can support the campaign at any time at siobhanbenita.com/donate.

Thanks to everyone for a fantastic event tonight to support our @LibDems London 2020 campaign.

Members old and new with @ChukaUmunna taking about Brexit, campaigning, the future of liberal politics and (of course) #BackBenita 🧡🔶 pic.twitter.com/3PDd1vx8cD

I visited the brilliant The Open Kitchen in Hounslow, which provides free meals to the vulnerable and needy. It's a small sanctuary where everyone is welcome - no questions asked - and given hot, home-cooked food (I can vouch for how good it is) and a safe space to sit quietly or to chat to other visitors. Everyone is treated with respect and dignity and the result is incredibly moving.  As ever, it was wonderful to be joined by Lib Dem colleagues Hina Malik and Hina Bokhari, who is standing for the London Assembly at next year’s elections.  And a huge thank you to Maqsood Ahmed for the invitation and hospitality.

"No judgement. No hassle. Everyone is welcome".
Inspiring visit with @bc_hina to The Open Kitchen in Hounslow today. A huge thanks to @maqsood84963069 for inviting us to experience this unique sanctuary where all visitors are treated with dignity and respect. pic.twitter.com/uGHEC7RvDq

The @LibDems have a proud history of championing LGBT+ rights. 💛
But we must continue to defend these rights, fight discrimination and push for equality in all areas. 🧡
I'll be in the Pride in London Parade on Saturday 6 July and Black Pride on Sunday.
See you there! 🌈 💖 pic.twitter.com/xBdvTkdHOB

I joined the Lib Dem contingent in the Pride march through central London, 50 years on from the start of the modern LGBT+ rights movement. Ahead of Pride, I wrote for Huffington Post explaining why I would be marching as an ally.

As Liberal Democrats, we can be proud of our party’s contribution to progress for LGBT+ rights. We were the first party to openly oppose Section 28, the Same Sex Marriage Act was introduced in 2013 because of the hard work of our MP Lynne Featherstone and now we are fighting to ensure trans rights are treated as human rights and that transition is made easier for people when that is what they have chosen to do.

But in a world where old prejudices are regaining mainstream support and hard-won freedoms are being undermined all of us can, and must, do more to defend and further progress LGBT+ rights. Saturday was both a celebration of how far we have come - and a reminder of the work we still have to do.

My first stop was in east London, joining the Black Pride UK event in Hackney. This event recognises that some people are dealing with multiple challenges, which can make it even harder for them to find their voice and safe spaces. The Lib Dems will continue to fight discrimination and work for equality in all areas.

Brilliant response to @LDCRE1 here at #UKBlackPride
Our values are London’s values! Love is love 💖🌈 pic.twitter.com/2yufeMdBqj

Later I headed west to Wandsworth to join local Lib Dem campaigners for their summer party. It was really good to meet some new members as well as long-standing stalwarts! We talked about the excellent foundation for the London campaign, how great it was that activists are enthused and engaged and what exciting prospects there are for the campaign. And, of course, there was another raffle!

Thanks to all who came to @BatterseaLibdem Summer Party, here's a whole bunch of us with @LibDems London Mayor candidate @SiobhanBenita pic.twitter.com/lyMyinQ8S9