Restore Free Travel for Under 18s in London

Siobhan Benita, Liberal Democrat Candidate for Mayor of London, has written to Grant Shapps asking him to urgently reverse the temporary suspension of free travel for under 18s in London. Sign the petition to support here. 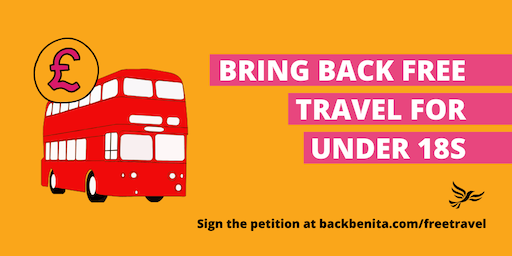 The condition was part of the recently announced support funding package for Transport for London.

Benita described the scrapping of the concession as “unjust” and said that it will be “a disaster for the capital’s poorest families”.

She further noted that promised “special arrangements” for those that qualify for free travel to school have yet to materialise and with many pupils due to return to school next week, the situation has now become urgent. Benita said:

“Young Londoners will be returning to school next week and many of them rely on free travel to get there. Taking away this concession was always unjust but without special arrangements in place for those most in need, the most sensible thing to do at this stage is to reverse the decision urgently.

I am writing to ask you to urgently reverse the temporary suspension of free travel for under 18s in London, a condition of the recently announced support funding package for Transport for London.

Firstly, the condition is unjust. Many young Londoners rely on free travel to attend school in a safe and environmentally responsible way. In normal times, around 1.5 million journeys made in the capital are for educational purposes. These journeys are essential and removing this concession will be a disaster for our capital’s poorest families.

Secondly, in your recent Ministerial Statement on the topic, you said that special arrangements will be made for those children who qualify for free travel to schools. Parents should not need to go through special bureaucratic procedures in order to get their children to school. But, in any case, no such special arrangements have been formally announced. Indeed, the Mayor of London has today made it clear to you how difficult and costly such a measure will be to implement.

With many children due to return to school next week, the most expedient thing to do is to reverse this damaging condition.

While I appreciate that measures to ensure Transport for London’s financial sustainability are essential, this particular concession will cost young Londoners dearly. Please urgently and permanently reverse the suspension of free travel for under 18s in London.